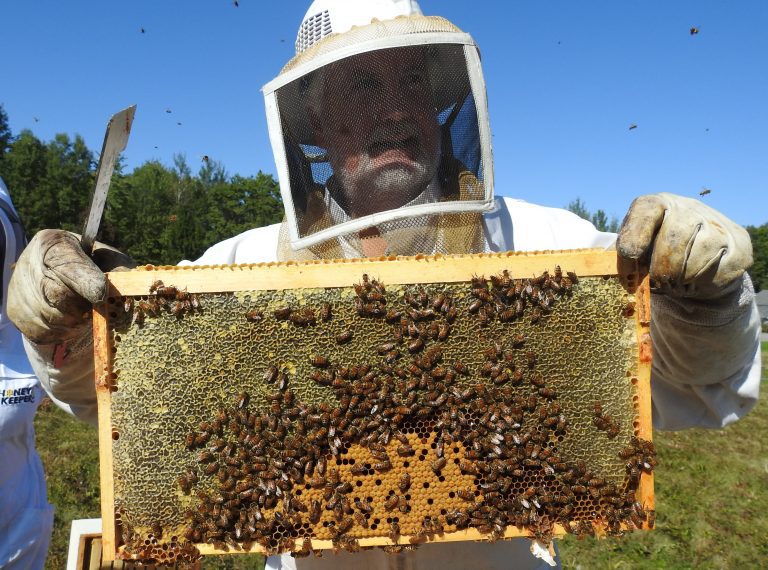 In 2015, we decided to stop mowing two large areas in the community in order to encourage pollinators and birds onto the grounds. In the summer of 2016, residents along with the Belfast Bay Watershed Coalition put over 400 plugs of wildflowers in the meadows.  Our next step to having the beehives was to have Mason Beehives; we put up three hives in our meadows in the spring of 2017 for the solitary bees.

We read books and went online and looked at numerous YouTube videos on beekeeping.  A resident and staff person took a class in the spring of 2018 on hive building and beekeeping with Peter Cowin, The Bee Whisperer. Other residents, who had had bees in the past, offered to assist with the project and Peter Cowin said he would be a resource as needed.

Peter recommended having two hives in case one hive is not doing well or if one hive is doing too well. We then needed to find the right location that offered a southern exposure and would be somewhat out of the wind – the most likely place was the meadow below the Ocean House.  Peter said that residents would likely enjoy watching the bees working at the hives – he suggested a bench nearby.

We also spoke with our landscaper Bobby Sorrentino and he said “awesome idea”. He said honey bees have never bothered them before and they’ve work around 5 or 6 bee hives with no problems. He said the gardens will bloom better – “it’s a win-win situation” and he doesn’t use pesticides so the bees are safe that way.

The cost for the two honey bee hives was around $550 plus personal safety equipment and bees. The cost for the second and following years is minimal depending if the bees winter over well.  We had some money left over from the wildflower collection and a donation from the Activities Committee to help finance the bee hive project.

We thought of offering the honey for sale at our November Craft Fair and giving it out as a Christmas gift to residents. The average hive yields 20 – 60 pounds of honey, plus bees’ wax and pollen (used for medicinal purposes).  To make it easy on us, The Bee Whisperer has the extraction equipment and the certified kitchen to jar the honey so we can sell it.  Any proceeds from honey sales would go to the Activities Committee.

Our bees arrived on Saturday, May 12, 2018, and have been doing extremely well.  Ned Lightner of Belfast Community Television (BCTV) was at Penobscot Shores on Wednesday, May 16 doing a show for “Somewhere in Waldo County” when we opened the hives for the first time.  He interviewed Penobscot Shores Marketing Director Steve Bowler about the new beehives that have been added to the meadow. Take a look here!

During the summer a number of us did weekly inspections of the hives looking for eggs, larvae, capped brood, the queen and anything unusual.  We are pretty certain that both hives swarmed and raised new queens in early August.  We also added a Nuc (nucleus hive  with 5 frames) to split up one hive that was growing so fast and the nucleus raised their own queen as well.  It was a great learning experience for all involved.

We were told not to expect any honey the first year, but our ladies produced nearly six gallons that we will be sharing with our residents and staff in addition to the lip balm that we made from the beeswax.  We had a wonderful first year and the bees are now tucked into their “beegloos” for the winter.  See you in the spring ladies.

2019 – We lost all three hives to a combination of varroa mites and cold.  We started over in May of 2019 with two packages of bees.  In early June, we were called to a home in Belfast to get a swarm that we successfully caught and two months later put into a hive that had lost their queen.  In June, we also added a new hive with a Saskatraz queen that built out the new hive with full stores of honey.  In July we harvested 6 gallons of honey and then another 6 gallons in September.   We did a walk-away split in a Nuc that has survived nicely along with our three other full size hives.  In September, we had the State Apiarist Jennifer Lund and our mentor The Bee Whisperer Peter Cowin over for a public talk and then an inspection of our hives.  They helped us right size the frames for winter.  We have been diligent doing our mite treatments this summer and fall and are hopeful the hives will make it through this winter and into 2020.

2020 – The three main hives survived the winter although we did end up losing the walk-away Nuc in April.  We re-queened the Saskatraz hive as we were not finding a queen or eggs – possible that she swarmed,  but there were still many bees in the hive.  All hives were strong going into June. We had a drought summer. A lady in Belfast called that she had a wild hive in her cedar tree; we fashioned a cone over the entrance and strapped a Nuc box to the tree and after a month was successful in gathering the bees which we then gave to a local woman who had lost her hive.  We were still able to harvest just over 12 gallons of honey during the summer which we bottled and sold to residents with the proceeds going to the Activities Committee.  All but one of the four hives looked very strong going into the winter.

2021 – Three of our four hives survived the winter. This has been a good year for our bees as we have had a good amount of sunshine and rain to keep the flowers blooming. We did two splits in June and one took so we were able to populate the hive we lost over the winter. We had a call from our cedar tree lady in Belfast; looks like a squirrel pulled the screening away from the old hive entrance and the bees are back. A couple of us went back to set up a bee box in front hive entrance to redirect the bees and hopefully get them to move into the new box. In July we spun out 90 jars of honey. In September, we made a critical mistake with putting a bee excluder on a hive with the top cover board venting hole facing down.  The vent hole facing down allowed bees from the other hives to enter and rob out the honey to the point that we had less than ten pounds from what should have been a 50 lbs honey super – oh well, live and learn.

2022 – We had a winter of extreme temperatures in the same days which is not good for honeybees.  During the warm days the bees would fly out to do “cleansing flights” and then return.  The temperature would drop 20 degrees within an hours or so and the bees would not have time to get back into a cluster so consequently they froze in small groups.  Of the four hives we only had one hive survive the winter.  An order for two packages of bees was put into the Bee Whisperer in late February.